Book of Cats online with bonus

The Book of Cats slot machine is presented by BGaming company. A slot with great potential and high dispersion contains an additional sixth reel. It is characterized by a unique bonus feature play in n1 casino. 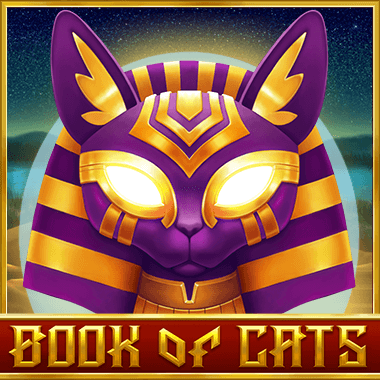 Description of Book of Cats

The slot machine consists of six reels and ten active lines. Only one symbol is placed on the additional reel. The Book of Cats slot invites players to an exciting journey that promises a meeting with the goddess Bastet.

The percentage of return of the slot machine is 94%. The control panel contains all the necessary functions. The manufacturer provides an autorun mode for the reels.

Features and symbols of Book of Cats

The game has an adjacent special symbol, which is both a Wild and a Scatter. It is represented by an image of a golden book. When one such symbol appears on the screen, the standard image is replaced to get a prize combination. The appearance of three such images simultaneously activates the prize round of free spins.

During the main game, all the cells on the additional reel are locked. The option is activated when a prize combination is dropped. The free spins round is accompanied by an expanding symbol.